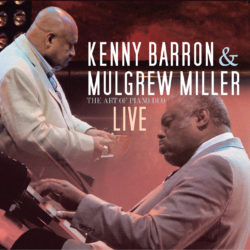 The works of true artistic masters are things to cherish. When two such masters come together to create, it is truly a moment to behold. Pianists Kenny Barron and Mulgrew Miller have cemented themselves as two of the foremost pianists and song interpreters of the 21st century. In an inspired conception, Barron and Miller were paired in duo performances, one in 2005 and two in 2011, that are presented here as The Art of Piano Duo – Live.

Miller’s unfortunate passing in 2013 has left a void in the jazz world, so it is extremely important to preserve his legacy. These fantastic performances stand as wonderful reminders of not only each pianist’s remarkable talents but also their affinity for one another and their ability to work together in this unusual dual piano setting.

The concerts that are presented on the recordings were originally produced by Jordi Suñol for International Jazz Productions. The first was held on August 7, 2005 in Marciac, France. The other two were in 2011, one in Geneva, Switzerland on May 12 and the other in Zurich on May 14.

The program of the concerts contains compositions that cover the full range of the jazz canon. Pieces from the great American songbook, from composers like Rodgers and Hart and Jimmy Van Heusen and Johnny Burke, sit alongside pieces by jazz legends like Duke Ellington, Charlie Parker and the ever-present Thelonious Monk. All are intriguingly performed either in duet or as solo pieces.

These remarkable performances are available for the first time in a three-disc set produced by Jacques Muyal for Groovin High Records.